Portugal seeks to be the new origin of blueberries in Europe 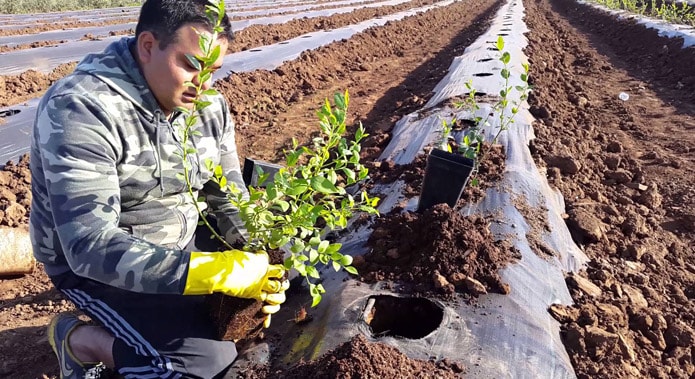 A large amount of foreign investment in the Portuguese raspberry sector has led to an impressive growth of exports in recent years, but blueberries seem to be ready to catch up as the number of plantations increases.

During our participation in the London Produce Show last week, a representative of the commercial promotion group Portugal Fresh told Portalfruticola.com that processed tomatoes were the largest horticultural export in the country.

But in the category of fresh fruit, the berries are far ahead of the herd.

"At this moment the berries are leading with about 117 million euros (US $ 131 million), and then we have oranges with 19 million euros"Said the vice president and CEO, Gonçalo Santos Andrade.

"In Portugal currently raspberries represent more than 90% of the volume of berries, because there has been a large amount of investment from 2005 in this sector".

"Especially in the last four years many foreign investment groups have settled in Portugal and have made some partnerships with Portuguese companies".

In 2015 the Iberian country exported 89 million euros of summer fruit, but this figure increased by a third in 2016.

In search of balance in the production of berries

While raspberries currently dominate the supply of berries, Andrade was confident that there would be some marked changes in supply dynamics in the medium term.

"The demand now for raspberries is good, but we will see a big increase in blueberries"He said, noting that the blueberries took much longer than the raspberries to go into production after planting.

"I think that the production of berries will increase a lot in Portugal - maybe we will keep € 95-100 millions of raspberries, but the tendency will be to balance between raspberries and blueberries".

The neighboring country, Spain, is the main export market for fruit and vegetables in Portugal, followed by France, the UK, the Netherlands and then Germany, but also highlighted the importance of the Brazilian market.

"They speak the same language and there are many people. Historically we have had very good numbers with our exports of Rocha pears to Brazil ", Dijo.

Recently it has had access to the Mexican market, the Portuguese pomáceas industry is also impatient to test the waters there.

"We opened Mexico a few months ago, so for next season we are going to try to export some pears and apples and we are going to make a commercial mission later this month to Mexico".

"There are also new geographies [we are seeing]. We are not authorized to export fruits and vegetables to China, but we expect our government to open that market soon, since there are many opportunities there ".

The raspberry sector has its sights firmly in China, having recently received a Chilean delegation to help the industry in establishing a strategy to penetrate the market.

"Even for Rocher pears, kiwis and apples, there are many opportunities. At this time we can only export to Hong Kong ", Dijo.