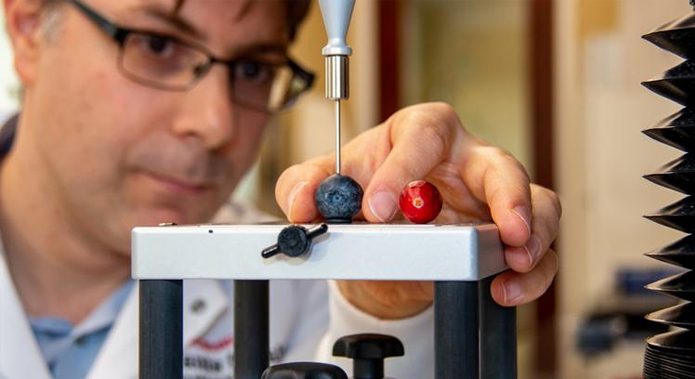 Massimo Iorizzo is one of the researchers behind a $ 12.8 million project to improve the quality of blueberries and meet consumer demand. C / O NC STATE UNIVERSITY

A team from North Carolina State University received about $ 13 million to study certain berries, which they hope to adapt to the changing needs of consumers and the industry.

The project, known as the Vaccinium Coordinated Agricultural Project, or VacCAP, will focus on improving the quality of berries, which are part of the Vaccinium species.According to the university, the internal wholesale value of the national Vaccinium industry exceeds $ 2 billion by year.

However, changing market preferences could spell trouble for fruits, giving researchers impetus to begin more rigorous research. ”In 2015, when I joined this community, it was clear to me and to many others that it was It is necessary to obtain funds to develop a coordinated, multidisciplinary and interdisciplinary project that could advance genetic discoveries with a possible application in breeding programs, "said Iorizzo.

"And that would focus on traits that are critical to stakeholders, including producers, processors, and consumers."

According to the Blueberry Global Statistics Intelligence Report, the driver of market growth has been product availability for the past decade. However, the report notes that the quality of the fruit has increased in importance. The North Carolina State Plant Institute for Human Health noted in a statement that "current blueberry cultivars often produce fresh market fruit with inconsistent texture and sensory profiles (eg, firmness, freshness, sweetness), what that limits the growth potential in high-value fresh markets. "

Those problems are further complicated by labor costs, driven by the need for manual harvesting, and account for up to 80 percent of production costs. ”Funding for blueberry commodity groups, such as the North Carolina Blueberry Council (NCBC) can only partially support research and improvement, while raising federal funds complements these investments, ”said Ralph Carter, president of NCBC.

"A project like this is critical to the continued growth of the blueberry industry in North Carolina and other berry-producing regions of the United States." Blueberries also have their own market problems as there has been a shift. Quick in juice consumer preference for higher value products, such as sweetened dried cranberry, which requires higher quality fruit to produce.

That quality threshold, according to the Institute of Plants for Human Health of the State of North Carolina, can result in disposal rates of more than 20 percent.

"The long-term economic sustainability of the blueberry industries depends on finding solutions that increase fruit production with improved quality attributes that meet the ever-changing preferences of the industry, the market, and the consumer," this the Institute stated. Plant for Human Health from NC State in a statement.

The project will be directed by Iorizzo at the Plant Institute for Human Health, which is located at the North Carolina Research Campus in Kannapolis.

Sugarcane, avocado and blueberries are the main crops in Olmos project