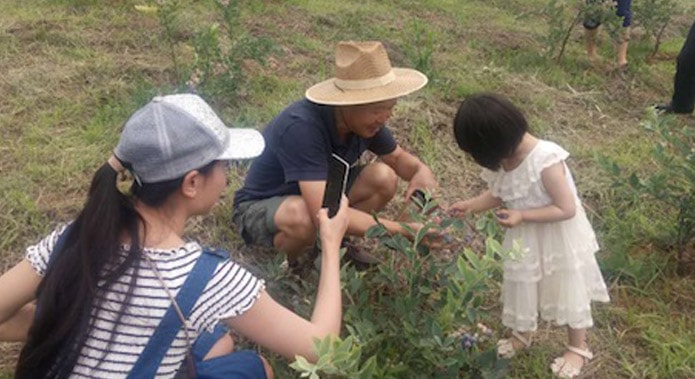 «The early, mid-season and late blueberry production seasons of Shaanxi take place from the 10 from June to the 20 in July, from the 20 in July to the 30 in August, and from the end of June to the beginning of September. Compared to last year, the volume of production this year is higher, so the market price is estimated to be around a higher 30%"Explains Wang Weibin of Shaanxi Dingjun Shan Blueberry Technology.

«Compared to last year, this year there is more production volume, and this is mainly due to the fact that there are more plants that have entered a more productive phase. However, spring snow has reduced the growth rate of blueberries and, therefore, the volume is not as high as expected. Regarding the market price, the average price this year is estimated at a higher 30%. last year, at the beginning of the season, and later, when the bulk of the volume reached the market, the prices were 100 yuan / 500 grams and 60 yuan / 500 grams (15 and 9 euros, respectively). The price of this year is calculated to be around 70 and 40-50 yuan per 500 grams (from 10 to 7 euros)«.

«We produce our blueberries in Dingjun Mountain, in Shaanxi Province and the production area is around 120 hectares. We distribute all our blueberries with three brands registered in markets of several cities through traditional consumption channels and also through electronic commerce. In terms of procurement, we cooperate all year with entities, including universities, and we have developed 3 series of 16 varieties of blueberries suitable for production in Shaanxi«.

The International Cranberry Seminar in Argentina will be held in Tucumán

Long-term contracts for container shipping are ...

Blueberries, Grapes, Avocados And Tangerines: The Successes Of Peru