A success was the Seminary of Tucumán… !! 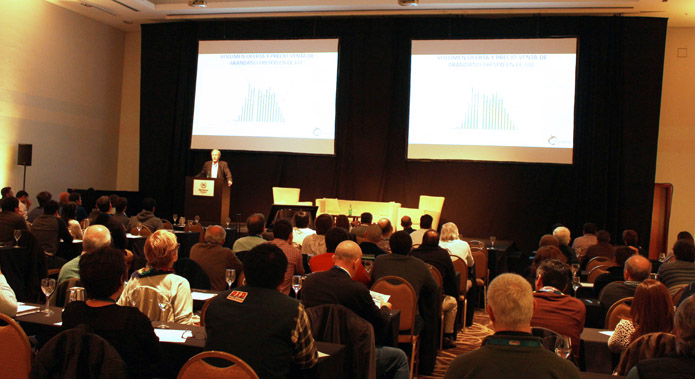 In the 8 ° International Seminar, this 28 held in June at the Sheraton Hotel in Tucumán, shared information and relevant knowledge regarding the quality of fruit, transport and logistics. The phytosanitary aspects and those of the postharvest process were addressed, as well as the knowledge and use of the new crop protection technologies, among other topics of interest.

The lecture by Manuel Alcaíno, on New actors in the blueberry market: How to prepare for the new scenario was highlighted.

Because last season was not good for everyone, no doubt. The climatic factor became a negative protagonist, which had a strong impact on prices. The uncertainty of the global and local economic climate was added to nature. To these factors we add the shortcomings of our industries, in terms of quality, productivity and condition of arrival of the fruit. And if these challenges were few, there is the incorporation of new actors to the market. Then it is necessary to discuss how to prepare for this new scenario.

Future challenges will not only be focused on adapting to climate change or taking precautions regarding the vagaries of the economy. It is necessary to face the reality of the incorporation of new actors to the market, because what began with the propagation of a suitable crop to produce it in limited agroclimatic regions and of special pedological characteristics, has been converted into a global crop, without climate restrictions or ground, thanks to technology.

Manuel Alcaíno is an international consultant and expert analyst who has radical opinions, his diagnosis is broad and concrete, he does not stay in the problem, but he raises the measures that must be implemented to solve the shortcomings that he sees in the field of industry. Regarding Chile, he said a while ago: "I think Chile needs an adaptation, an urgent renovation of the variety barracks that we have"And I added,"In Chile there are almost 20 thousand hectares planted with blueberries and 90 produces a thousand tons of fresh fruit, plus other 30 thousand that go to the processing industry, which makes a total of 120 thousand tons of production, so we would be talking of 6 ton / ha, which is very low. If we take out what is growing and others, we would reach 8 ton / ha, which is still very low".

The expert is in favor of advancing the varietal change and regulating exports, eliminating the third third of the harvest, prioritizing quality rather than the quantity of exportable fruit. Third, Alcaíno proposes packaging at destination, because today's machines have nothing to do with what was ten years ago in terms of packaging. There is a lot of mistreatment of the fruit, there is bruising, there is deterioration, according to his words.

"The advantage is that you pack the product you are going to occupy, with the indicated or requested packaging, and on the other hand, you grind the fruit at the time of delivery and not before traveling", He emphasizes.

Clearly they are proposals that need a cultural change regarding the approach that should be given to the blueberry industry in the immediate future, and certainly decisions and agreements are needed to implement the changes that boost the industry and mean that qualitative leap that most wait, because it is undeniable that as demand grows in the world new actors have been incorporated into the market and the demands have then increased.

Manuel José Alcaíno de Esteve, is an agronomist at the Pontificia Universidad Católica de Chile, chairman of the board and founder of the consultancy Decofrut, adviser to numerous fruit exporting and producing companies in Chile and Peru, a member and part of the Board of Directors of the Board International Consultative Produce Marketing Association, PMA.

Miguel Valero: "Producing has never been so easy ..."

Peru: Exporting cranberry to the US is complex, but very profitable