New techniques of grafting in blueberries: "There is the possibility of carrying out the single-trunk culture"

"This novel technique could have other applications even more interesting, which in the not too distant future could significantly change the current crop systems" 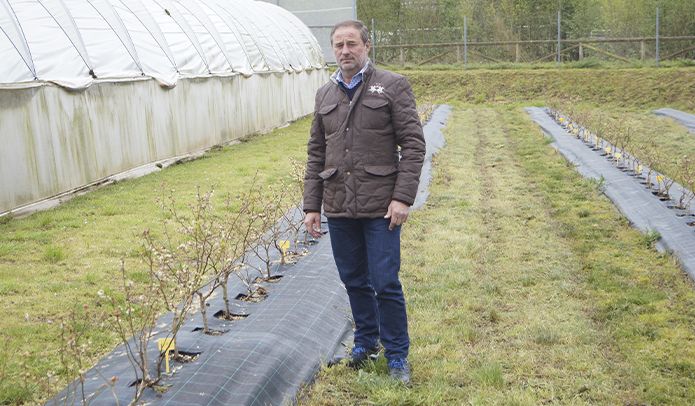 Generally, the only possible alternative for the varietal replacement is to start and plant again, with the consequent loss of production for a long time and the great economic cost that this implies. However, every day there are more specialists or experts who, according to their experience in field research, have proven that there is an alternative to graft existing plants with a new variety. This is already absolutely possible technically and very economically viable, as well as advantageous in productive terms.

For this reason, the researcher from the Regional Agrifood Research and Development Service of the Principality of Asturias (Serida), Juan Carlos García Rubio, has been invited to attend the XVIII International Blueberry Seminar in Monticello, Chile, on April 16, and expose on “The graft in blueberries: change of variety and other applications of interest”

Some years ago, this researcher carried out a test to measure execution times and other resulting variables that would serve as a guide for the planning and large-scale execution of this alternative of varietal replacement for the cultivation of blueberries. The objective of the work carried out by Juan Carlos García Rubio, along with two other experts from Serida, was to know as closely as possible the needs of labor for each of the different tasks that this technique entails and to be able to carry out a Cost estimation for each particular case.

The sequence of operations performed in the graft technique was as follows: (clarifying that they should be adapted to the production schedule of each country or region)

The percentage of graft success depends fundamentally on the execution and the affinity between pattern and variety. In the second year of grafting and first of harvest, the additional expenses to those of a traditional plantation are those corresponding to the elimination of regrowths from the crown, which are already much less than in the year of grafting. In subsequent years this expense is no longer significant, since, if the crop is properly managed, the regrowths from or near the crown are the minimum and no longer represent any competition for production, so they can be eliminated with the winter pruning

Regarding the yield, in the first year of harvest an average production of 5 kg / plant (0,83 kg / graft) was obtained, which represents about 11 t / ha, a figure very close to that achieved in an adult plantation in full production, which is reached between 6 and 7 years after planting.

The economic cost of the change of variety through grafting is well below what it would mean to start the crop and establish a new plantation. In addition, a considerable increase in revenue should be added due to rapid entry into production and eventual improvement in yields.

The researchers conclude that grafting is a viable practice for variety change, both technically and economically, ensuring that this novel technique could have other more interesting applications and in the future could significantly change the current systems of culture.

One of these is to make plantations with plants grafted from nursery and on different patterns, looking for the possibility of growing in a greater range of soils, looking for a positive influence on the phenology or fruit quality.

There is even the possibility of carrying out the single-trunk crop, which would facilitate the possibility of a mechanical harvest, "practice that we are sure will become habitual to reduce the costs of collection, which is the most important operation in economic terms", says the international expert.

For the agronomist, Pilar Bañados, grafting is a very good option for varietal replacement and ensures that with the implementation of this replacement technique a year of production is lost, but the following year, if the job is done well, it can produce again, not at the same previous levels, he warns, but already "in the second year the previous levels can be largely recovered and with a new variety, improving the quality of the fruit," he says.

The berry specialist says that Chilean producers must reinvent themselves to regain competitiveness in the international blueberry market.

“We cannot continue looking at this crop and the business with the same eyes that we looked at before (…) we have to worry and take care to produce better quality fruit,” insists Pilar Bañados.

Bathed explains that, if good feet are occupied, in plantations that are in good condition of roots, instead of being forced to tear them away, grafts are a very good alternative, but warns that an important aspect is that when talking about grafting, You should know with which varieties to change. When it is made with free varieties, such as Duke for example, there is no problem. “On the other hand, when considering the possibility of grafting with protected varieties, they affect the payment of royalty or even with Club varieties, this issue is complicated because you must first have the authorization of the respective licensee and, if authorized, you must consider the payment of the corresponding royalties and the delivery of fruit to the owners of the license, of be the case, ”he clarifies.

In the International Seminar of Blueberries of April 16 in Monticello this topic will be addressed in depth, complemented with the analysis of the latest research in rootstocks and the experience in the United States, by Jeffrey G. Williamson, professor and specialist of the Department Sciences of the University of Florida, USA.

To purchase your tickets go to the following link: