Julia Gamarra will present at the 7 ° International Seminar of Lima: "Market strategies to promote the export of blueberry from Lima to the United States" 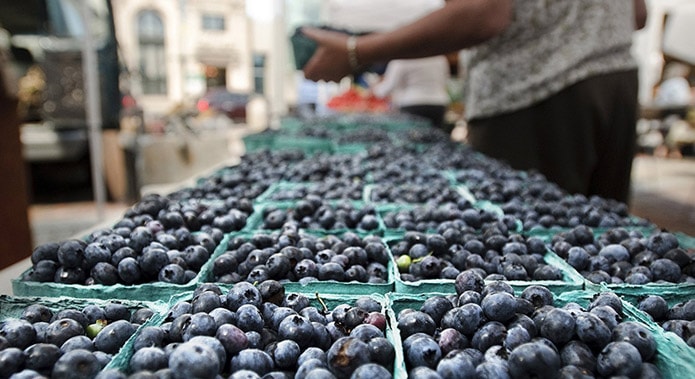 The next 13 in June will be held at the JW Marriott in Lima, Peru, the 7 ° International Seminar "Peru and the cranberry industry: Defining strategies for access to new markets" and Julia Gamarra will be one of the reporters developing the theme "Market strategies to promote the export of blueberries from Lima to the United States" Gamarra is Agroindustrial Engineer of the National University Federico Villarreal of Peru, and Master in Agribusiness of the National Agrarian University La Molina of Peru.

Access to new markets, or a greater presence in the markets where blueberry production is currently commercialized, is a permanent task for Peruvian exporters, because it is an industry that has grown exponentially. According to Alfonso Velasquez Tuesta, executive president of Sierra and Selva Exportadora, an agency under the Ministry of Agriculture and Irrigation of Peru (Minagri), the production of blueberries in Peru at the close of the 2016 would have reached 20 a thousand tons, doubling the production of 2015 where the volume amounted to 9.600 tons. This growth is due to several factors, such as the increase in hectares (which has risen in recent years, from 1.900 has in the 2014 to 2.500 has in the 2015 and 3.200 has to the end of 2016), the entry of new companies and plants with higher production. "It should also be taken into account that the blueberry plants will be 7 years old, which indicates that they have higher production", Says Velasquez Tuesta.

In Peru, blueberry cultivation responds better and better to the various agricultural areas of the country, so that the Peruvian blueberry industry has the capacity to supply the international market in times of scarcity (between the months of September to November). The search for new markets is then an objective of maximum urgency for the destination and marketing of Peruvian producers.

The blueberry production of the Peruvian industry is generated mainly in the La Libertad region, which represents 90% of the total national production, to this are added Lambayeque, Ica, Lima, Áncash and Cajamarca. Peruvian blueberry exports began 2017 with volumes and values ​​lower than last year. According to information from Agrodata Peru, during the January-February period of this year, shipments of 2.380.023 kilos were made, for a FOB value of USD12.577.868. The data is down when compared to the first two months of 2016, when Peru exported 3.394.455 kilos for a value of USD21.236.816.

According to the same source, during the first two months of the year the company that managed the most shipments abroad was Hortifrut - Tal SAC with sales of USD3.8 million. Next in importance are Talsa with USD3.5 million and Camposol with USD3.3 million, with an average price of the product in the international market of USD5.28 per kilo.

The main export destinations for Peruvian blueberries were the United States, which received shipments of USD6.1 million (48% of the total), followed by the Netherlands with USD3.2 million (26%) and England with USD2.9 million (23 %).

The development of new and better strategies to address the US market, which is the world's main destination for blueberries, is a topic of utmost importance for Peruvian producers and that Julia Gamarra will develop in the context of the 7 ° 13 International Seminar of June at the JW Marriott in Lima.

Julia Gamarra is a specialist in Quality Management Systems and Food Safety and an expert in national and international food legislation (NTP, NMP, CODEX, FDA, EU). He is currently a specialist in national and international food regulation at GLORIA SA, where he reviews and validates product formulas, supervises labels, tracks registration procedures and re-registers food health records, among other functions. With extensive experience in the area of ​​quality, he has served as Head of Quality Control for more than five years. She is also a member of the National Directory of Researchers and Innovators (DINA) and researcher of blueberries in Peru and the world, a task she has been doing for almost twelve years.

J. Retamales at the 8th International Seminar of Tucumán: «Pruning in blueberries: Why, why, how and when ...»

UNITEC: the ideal partner to win addictive challenges in the global market

Opinion: The Danger of Inbreeding in the Blueberry Industry