Intense journey to an industry of 30 years 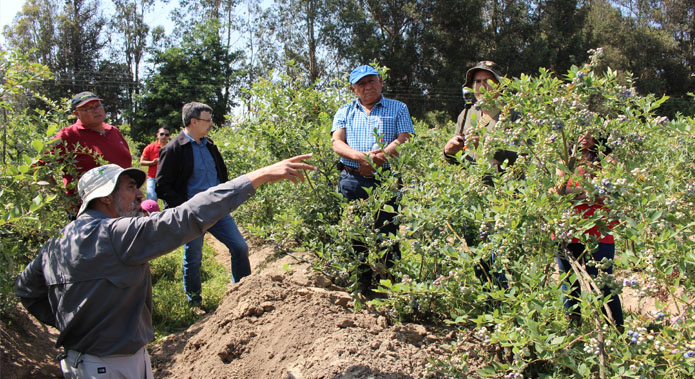 The long and intense trip to the Chilean blueberry industry was quite a success, and apparently there was no aspect left that had not been visited or known, so it was enriching for the dozen participants in the tour, who valued it as very generous in the socialization of knowledge ...

A dozen people of different nationalities, among which there were new investors and former producers and exporters, shared a week-long trip through the different crops of Chilean blueberries, visiting different areas related to the cranberry industry, from the micropropagation laboratory to the packaging and post-harvest industry, in a commercial technical tour organized by Blueberries Consulting.

Driscoll's, Dole, NiceBlue, Agroplus, Bluesciences, Vivero Hijuelas, Agrícola Los Silos and Golden Blue, among other companies, were visited and interesting technical talks by Raúl Olivares, manager of Driscoll's in Chile; Esteban Chacón, manager of Dole Chile; Jorge Retamales, academic and researcher at the University of Talca; Patricio Arce, manager of Bluesciences, geneticist and professor at the Catholic University; Sara Vial, manager of Plantae, an exporter that makes shipments abroad in the name of Sunnyridge Nurseries; Sebastián Domínguez de Agroplus, and Jose Ignacio Searle, manager of Grupo Hijuelas, among other industry players who participated.

The delegation, made up of Colombians, Peruvians, Chileans and a Chinese representative of the export industry, was able to soak up almost all aspects of the Chilean cranberry industry and appreciate in person the different phases of crop development, highlighting the good disposition and knowledge of the technicians or managers of the fields that received the participants of the tour.

The participants of the commercial technical tour organized by Blueberries Consulting in November, visited fields of cultivation of blueberries in five regions of Chile, from the Fourth to the Eighth Region, including the Metropolitan Region, with different varieties of plants grown and produced for fresh fruit or for processed or frozen products.

The tour contemplated the visit to crops in soil and substrates, outdoors and under cover, and all could talk to the technicians or managers to know the details that make one form or another of cultivation more viable, according to the realities or specific needs of each of the participants.

The objective of the tour, in addition to knowing in situ the reality of the crop and sharing experiences and information with different actors, knowing the different management techniques and the advances and innovations that have been developed in the country, is to offer the participants the maximum amount of information and knowledge, in such a way to be able to make correct decisions regarding their possible investments in the field, or to continue in a better way the management and development of their own crops.

A great success was the long and intense trip to the Chilean cranberry industry, and apparently there was no aspect that has not been visited or known, so it was enriching for the ten participants in the tour, who valued it as very generous in the socialization of knowledge, sharing an experience acquired over thirty years and which is currently the world's largest exporter of blueberries, with more than 95000 tons of fresh fruit derived to the different markets of the world.

The tours will continue, adding new attractive aspects to know about the cultivation of cranberry. Blueberries Consulting is planning for the beginning of 2017 an invitation to producers or interested Chileans to visit the extraordinary progress of the blueberry industry in Peru.

INIA highlights the importance of biological control in berries