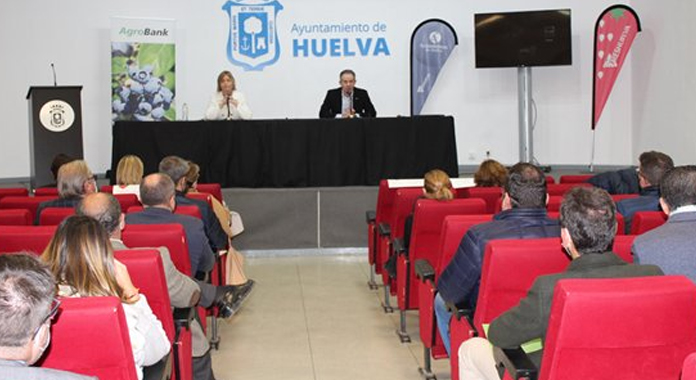 The impact and application of the Royal Decree on packaging and packaging waste prepared by the Government, the financial solutions of AgroBank for the berry sector and the statistics and news of the agricultural insurance of red fruits 2021 were the topics that were addressed in the Technical Conference organized by Freshuelva with the sponsorship of CaixaBank.

The territorial director of CaixaBank in Western Andalusia and Extremadura, María Jesús Catalá, And the Freshuelva manager Rafael Domínguez, were in charge of opening the Conference, hoping that it would be a "fruitful and profitable" day for the attendees.

María Jesús Catalá highlighted that CaixaBank "is beyond financial needs, since we are a bank, but also, as we show, we are closer and further away from what only financial needs are", having an impact on support for these conferences because “we want to accompany you in the transition process in which we are all and that goes through digitization, new varieties… The moment we live in is very important. It is not a time of change, it is a change of time ”, he pointed out. 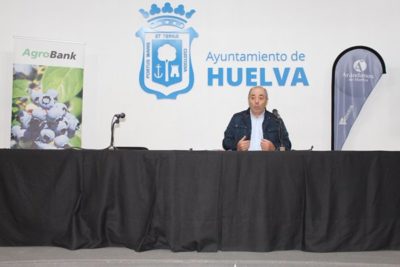 The territorial director of Agroseguro in Andalusia, Fermín Flores, during his speech.

In his speech 'Royal Decree on packaging and packaging waste. Repercussion and application in the berry sector ', the general director of Veripack, Carlos Bureu portrayed and analyzed the current uncertainty scenario leading up to the approval of this Royal Decree that prohibits the use of plastic packaging for quantities less than 1,5, XNUMX kilograms, which are usually used by red fruits.

However, Carlos Bureu specified that there will be a list of fruits, which will include the most delicate ones, which will be exempt from this measure and in which, in his opinion, the fruits should be included. berries. Precisely, Rafael Domínguez confirmed at this point that Freshuelva is working for it, so that the berries have said exemption.

In addition to explaining the content and consequences of this Royal Decree, especially for the agricultural sector in general, the director of Veripack warned of the “significant” increase in the price of plastic, but also of other materials such as cardboard, which also It has supply problems, so Carlos Bureu considered that the possible alternative to plastic containers "is not in the cardboard since it already has real supply problems."

With these wickers, he insisted that the current situation of the agricultural sector and of service companies such as Veripack is one of “enormous uncertainty because we are talking about increases of € 300 per ton in the cost of the raw material of the container, without counting that, on the other hand, they also want to levy a production tax that would range between € 300 and € 500 per ton ”. 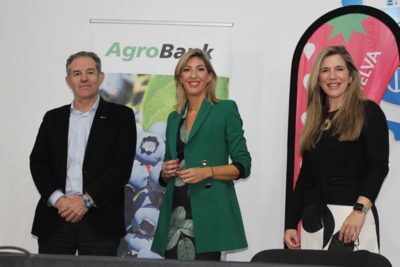 Rafael Domínguez, together with the commercial director of CaixaBank in Cádiz and Huelva, Yolanda Vera, and the head of AgroBank Eloísa del Río.

A little more optimistic was the person responsible for AgroBank, Eloisa del Rio, which presented the financial solutions for the berry sector offered by the financial institution and classified it into four pillars, the first of which is represented by the specialized attention given to the agricultural sector in general, and that of red fruits in In particular, through the important network of CaixaBank branches in the province of Huelva.

Specific products for the berry sector constitute the second pillar of AgroBank in the province, among which Eloísa del Río highlighted the agro-investment loans for woody crops, with which a response to the diversification of the sector is given by substituting hectares of strawberries for others of blueberry or avocado; and the salary payment card for seasonal workers, with which the peculiarity of the workforce in the sector is also satisfactorily addressed, since 6.300 cards have been made in two campaigns and 22 million euros have been paid. with 57 member companies.

Finally, Eloísa del Río highlighted that CaixaBank carries out different actions to "be close to and accompany the sector" with its presence at fairs, supporting conferences or with important knowledge transfer actions, such as the AgroBank Chair.

After announcing that the entity's fourth pillar with the sector, based on innovation and digital transformation, is "under construction", he asked attendees to "always share any ideas with us because you are the ones who make the best contributions to our products".

The territorial director of Agroseguro in Andalusia, Fermín Flores, also recognized that the agricultural sector is mired in a situation "of unprecedented uncertainty", marked by a current drought and by an always adverse weather in recent years that has been reflected in the gradual increase in Agroseguro compensation.

Specifically, he pointed out that last year compensation amounting to two million euros were processed, the largest being those for strawberries and other berries, which concentrated aid worth 800.000 euros in a sector that is also the most insured in Andalusia, with 970 declarations, more than 8.000 hectares and more than 200.000 tons.

In this area, he highlighted the work of Freshuelva and the insurers so that the red fruit sector is a "very safe" sector, although he acknowledged that "there are things to improve, such as setting compensation, as this year has been fixed the price per greenhouse, after the accidents caused in the province ”.

Finally, Rafael Domínguez accompanied the commercial director of CaixaBank in Cádiz and Huelva, Yolanda Vera, to close the Technical Conference, in which she said she was "delighted" to "accompany Freshuelva" and thanked the participants who "have us put in the best situation to face the challenges of the sector, which are not few, but in which our mission is to accompany you and do it from the proximity ”.

Collaboration between the two entities

This Technical Conference is part of the sponsorship agreement that Freshuelva has been with CaixaBank for two years and that in 2020 the CaixaBank Fresh Live Seminar 'Red fruits to increase defenses and help prevent Covid-19' was materialized in telematic format, organized in the context of the Fruit Attraction LIVEConnect fair by Freshuelva with the collaboration and sponsorship of the bank, and which was led by the doctor and specialist in Urology Juan Carlos Ruiz de la Roja.

Water is already trading at the price of gold in agriculture