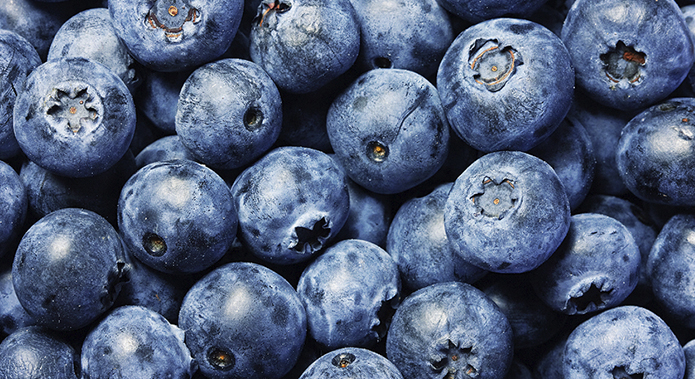 According to the latest Crop Report issued by the Asoex Blueberry Committee, 48 tons were exported at week 4.238, which contrasts with the 5.150 tons shipped in the same week of the previous season. However, the total accumulated to date amounts to 11.653 tons, which represents 10% more than the accumulated on the same date of the last season.

This week, the volumes harvested are increasing and are currently focused on the central zone, which is at the peak of the harvest. The south central zone is also strongly increasing the outputs, mainly from the Maule Region where early varieties are at peak volumes and in the Ñuble and BioBio regions that are seeing a concentration effect on the harvests of early varieties (Duke). Therefore, for this week 49, the exits should be located around 7.000 tons, thus starting the peak weeks of exports from Chile.

In relation to the climate, during the week 48 there was a frost that mainly affected some areas of the Ñuble and BioBio regions, with localized damage and little impact on total exports.

Finally, organic blueberries present to date a total exported of 3.025 tons, 82% more than the previous year. The main destination is North America, with 97% of shipments. 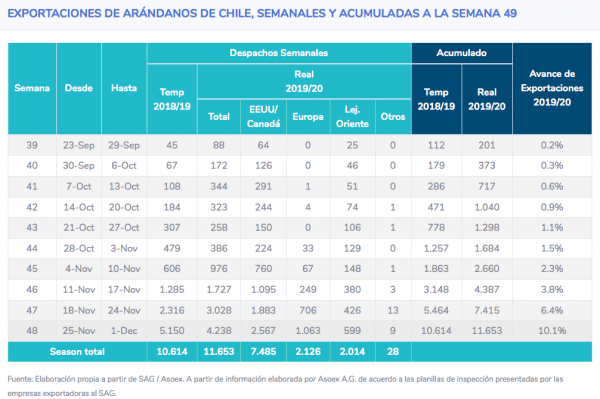 North Zone: Harvest volumes in decline in the Coquimbo and Valparaíso regions, with Jewel being the most important variety at this stage of the season.

Downtown area: The O Higgins region is in peak harvest weeks in varieties such as Duke and ONeal. Meanwhile, the Metropolitan Region is passing the peak, however volumes are low. Main varieties are Jewel and ONeil.

Central-South Zone: The Maule region continues to increase its harvest volumes, the early varieties are at the peak or passing the peak depending on the area, while the mid-season varieties are beginning. In Ñuble and BioBio, Duke is at peak and a high concentration of the early variety crop has been observed, as well as a slight advance in the beginning. Mid-season varieties would be departing in line with previous seasons.

On the other hand, there was a frost on 48 week, which had a slight impact on the area, affecting localized orchards.

South Zone: The harvest is starting in Araucanía with Jewel, Star and Duke, among others. The onset is observed in line with a normal year.